Tracks 2, 3 & 4 were recorded for the soundtrack of the DVD based on the book, The Jesse James Northfield Raid: Confessions Of The Ninth Man by John J Koblas.Available in bookstores and gift shops.Track 1 was written for the upcoming documentary based on the John Koblas book, Robbers of the Rails: The Sontag Boys of Minnesota about two brothers raised in the Midwest who grew up to become feared California outlaws. Special thanks to the Flathead Cats for sharing their talents on this tune. 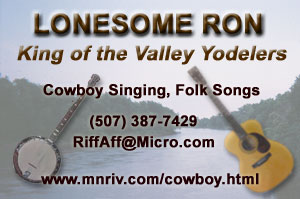 Back To Top • Return to Main